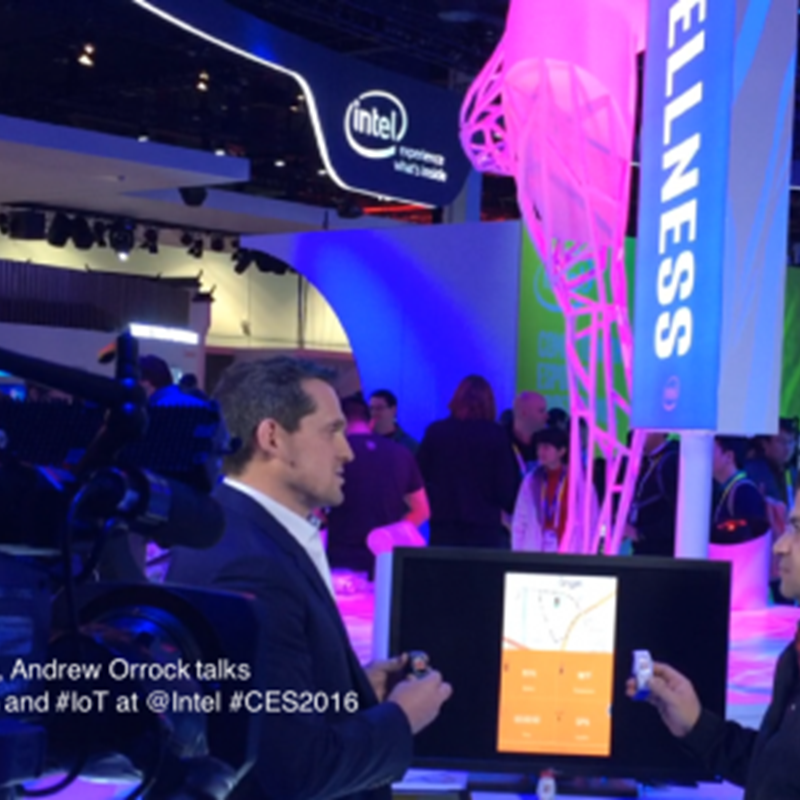 We’ve just got back from Las Vegas and Consumer Electronics Show 2016 – one of the highlights of the technology calendar – a world of wonders where the very latest in consumer technology hits the global arena and big names and startups alike can showcase their brilliance and innovation. Arkessa were honoured and excited to be alongside our partners Intel on their main booth and supporting a super cool new wearable customer Child Angel. Read on for our round up of an inspirational week…

Arkessa was at CES 2016 alongside Child Angel in the Intel booth. Child Angel is a world-leading wearable for children powered by Intel and connected by Arkessa. You can read all about it here. The Child Angel team were absolutely delighted to receive the Parent Tested, Parent Approved CES Top Pick Award and we enjoyed celebrating with them. It was an excellent week for the Child Angel product which received strong interest from across the globe and from buyers and distributors across a range of different channels (insurance, healthcare, online retailers, traditional distribution, education and theme parks). Leading technology matched by excellent product positioning and marketing.

The 150k+ visitors to CES 2016 (numbers are still to be confirmed) had more than enough to keep them entertained and far too much to summarise so we’ve picked a few of the highlights and trends of the show below.

The Yuneec Typhoon H featured in the opening keynote with a cool mountain bike demo tracking the rider through a dense and complicated forest. The drone uses Intel’s RealSense technology to judge its proximity to objects in order to manoeuvre around obstacles, allowing the user to focus on taking amazing video and photo footage rather than worrying about the challenges of steering a drone. This year’s show hosted the ‘Drone Rodeo’ out in the desert, miles away from the city lights (and any low-flying aircraft) and there was some serious drone technology on flying display.

Alongside Intel-powered Child Angel, other wearables attracting attention at the show included the FitBit Blaze smartwatch and a biometric smart bra designed by Canadian startup OMsignal. The OMbra is described by the company as a personal trainer you can wear – bringing wearables and cognitive technology ever closer together. This was one of the key themes of CES 2016 and was best summed up by Intel’s CEO, Brian Krzanich, in his keynote, when he said ‘computers are becoming an extension of you.’

Virtual Reality (VR) products including Jaunt, Oculus Rift and HTC’s Vive alongside Playstation PR and Samsung Gear VR which is also powered by Oculus, were showcased last week to the delight of thousands of CES visitors, as 2016 – the first year consumers will have real access to virtual reality headsets – kicked off in good style.  Gaming and VR frequently go hand in hand but Ericsson showed a different dimension for the technology by showing how an Oculus Rift VR head-set fed by a 360-degree view from inside a Volvo excavator could control the digger’s shovel and drive the equipment around. Next generation high-speed mobile technology was key to remote operation and highlights how to help improve safety and training in what are often dangerous or hazardous environments. It might also be that this technology is the means of virtually attending CES 2017!

At the top of the car tech agenda is the driverless car system. Like it or not, cars and car ownership are going to change dramatically over the next decade. Improved traffic flow, reduced pollution and safer roads will be the results of connected and automated driving with less reliance on human intervention, and equally less reliance on the combustion engine. Already demonstrated by Uber and Lyft (now with GM investment), car usage and ownership is distinctly shifting towards car sharing and on-demand ride sharing.

Car-makers are also partnering to help make us more productive while on the move by enabling everyday gadgets to pair with in-car infotainment platforms. Some examples:

Amazon’s Alexa was blazing the trail at the show in voice recognition for smart home systems and paving the way for the future to embrace the combination of AI with IoT to create smart homes. The much-maligned connected fridge was on show and came across very well at Samsung who presented the Family Hub Refrigerator – a fantastic smart fridge which served as a calendar and TV and allowed family members to leave each other notes, display artwork, record use-by dates, and even order shopping using the fridge.

As with other sectors, one of the hurdles to massive adoption of Smart Home technology is ease-of-use.  If the setup process is even remotely technical, the Smart Home may never happen in a big way. Gesture control, smart buttons and voice recognition are all part of the solution and demonstrated to good effect by the substantial number of new Apple Homekit compliant devices. The Apple-designed protocol is intended to make it easier for users to interact with products in the growing smart home market. The biggest advantage, for now, is the ability to control and check the status of different devices by simply asking Siri.

CES 2016 was an Aladdin’s cave of innovation and invention and it was just great to be part of it. Of course, the vast majority of the products and services on show have a fundamental need for secure, reliable, global connectivity. Of equal note is the importance of partnerships and eco-systems in IoT. No single company can do it all and it was refreshing to experience and participate in some true collaboration.

See you next year. Next stop Mobile World Congress and Embedded World – look forward to Connecting with you there.